In the next 24 to 48 hours, this will be resolved one way or another, but if you’ve got a few minutes today, I could really do with your help.

We’ve been having some issues with Porcelanosa, a very expensive kitchen and bathroom company.

I’m going to skip over the problems we had during the design phase.

I’m going to skip over the fact they charge 70% or more for products (in a sale) than you can get elsewhere.

Let me summarise the most recent issues:

1) We asked for delivery on Monday.

When the delivery arrived it contained only the kitchen, no kitchen tiles, no bathrooms and no bathroom tiles.

We’re supposed to magically know that they send them from different departments (probably the same warehouse) and we have to book deliveries in separately.

I don’t know about you, but when I request delivery of an order on a day, I expect the whole order to be delivered. But unless someone mentions, anywhere, at any time, including when the delivery was booked, that’s not how it is, you’re going to expect it.

2) We were accused of not communicating with them, when we spoke to them the Friday before delivery. Sadly this was on a phone call so I have no evidence of it and wil just have to vent my frustration here.

3) When the products arrived they came in simiar condition to this: 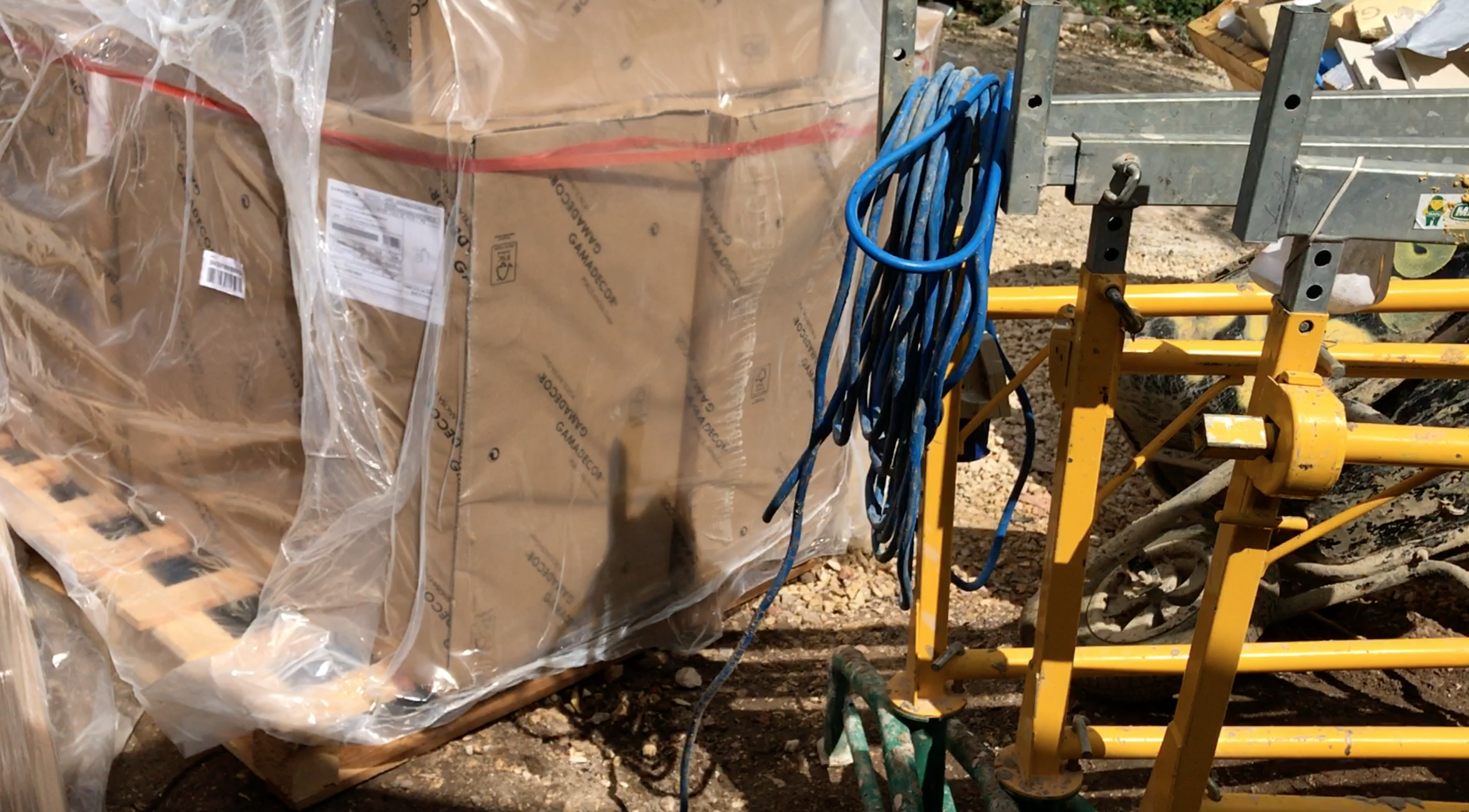 The above boxes are partially off the pallet because they’d fallen off in the truck and the driver had just pushed them back on.

No proper steel stacking cases, just heavy cardboard boxes loaded on top of other cardboard boxes. Kinda like how your gran packs when she moves home.

We refused to sign for the delivery, it still hasn’t been signed for although the driver just left it here.

4) Eventually, someone from Porcelanosa came out to see us. I personally think it’s because I told them there was a very expensive kitchen sitting on the drive, unsigned for and it was about to rain.

He, to give credit where credit was due, was very nice. Apparently everything would be fine inside because they were very well packed in the boxes. 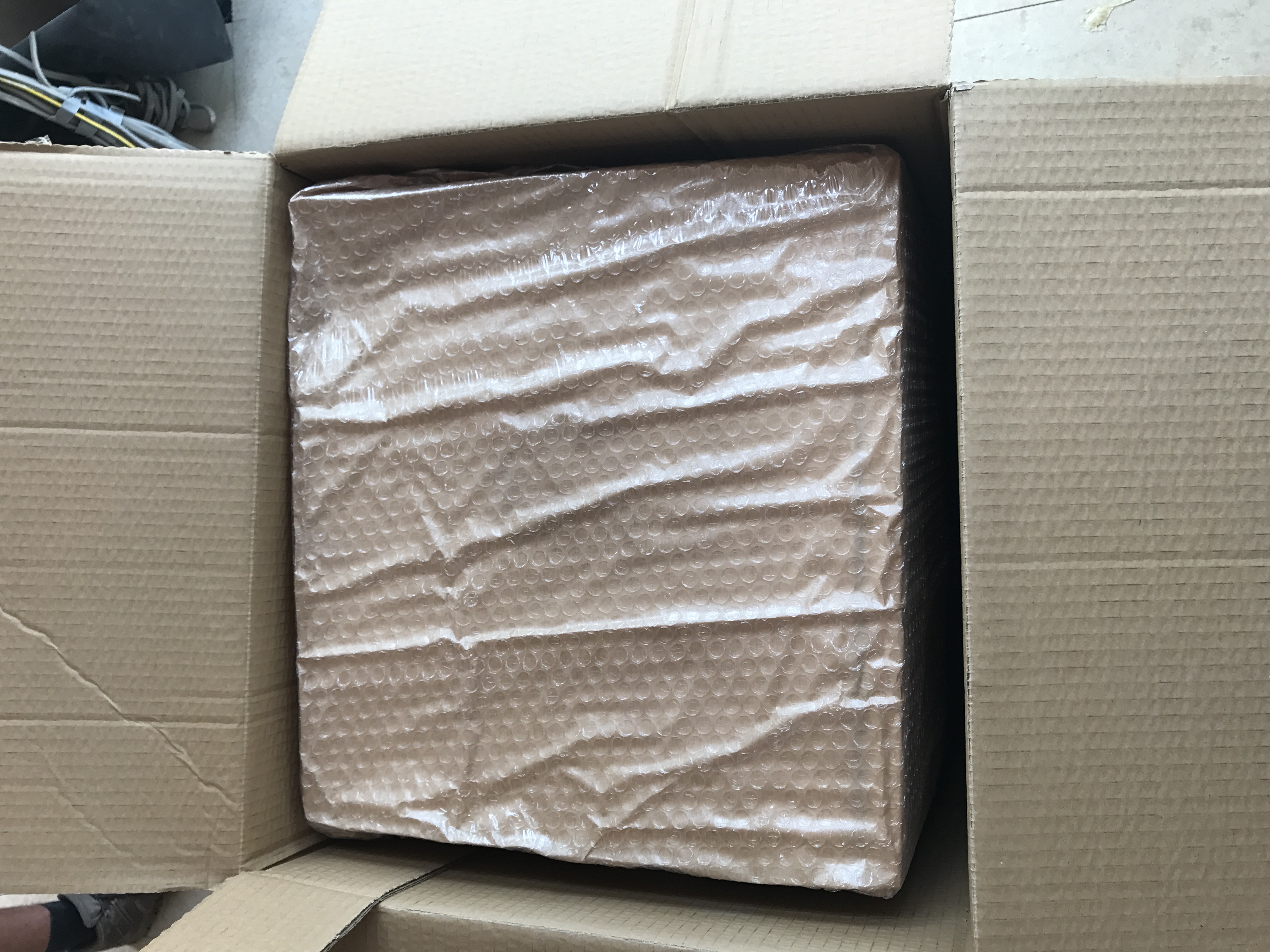 Our removal company packed our forks with more protection!

BUT… this is where they top the icing on the cake…

5) In their conditions they say you only have 48 hours to report damages.

However, we found out that the kitchen CANNOT BE FITTED UNTIL THE KITCHEN TILES HAVE GONE DOWN.

How convenient that the kitchen tiles, which hadn’t even been scheduled for delivery, are not able to be delivered until AFTER the 48 hour timeframe!

I don’t know about you, but whatever I’m told about them being different departments, the only reason I can think of for not delivering your kitchen tiles with your kitchen, is that they’re hoping the builders won’t unpack the kitchen units until after the 48 hour period has gone and the tiles have arrived and been fitted. This means it will be too late for them to take any responsibility of any damage from their poor packing and delivery.

If you’ve ever felt like someone’s trying to screw you, this is it.

Porcelanosa pushed us between the bathroom and the kitchen teams, trying to not take blame in what seems a well rehearsed farcical pantomime.

A number of calls about this later, and they agreed to extend it by two days.

However, nobody has signed for this kitchen, so as far as I’m concerned we’ve not had delivery and Porcelanosa still owe us a kitchen!

6) It was getting kinda late last night, but hey… let’s take a look at a couple of these units to see if there’s any damage. 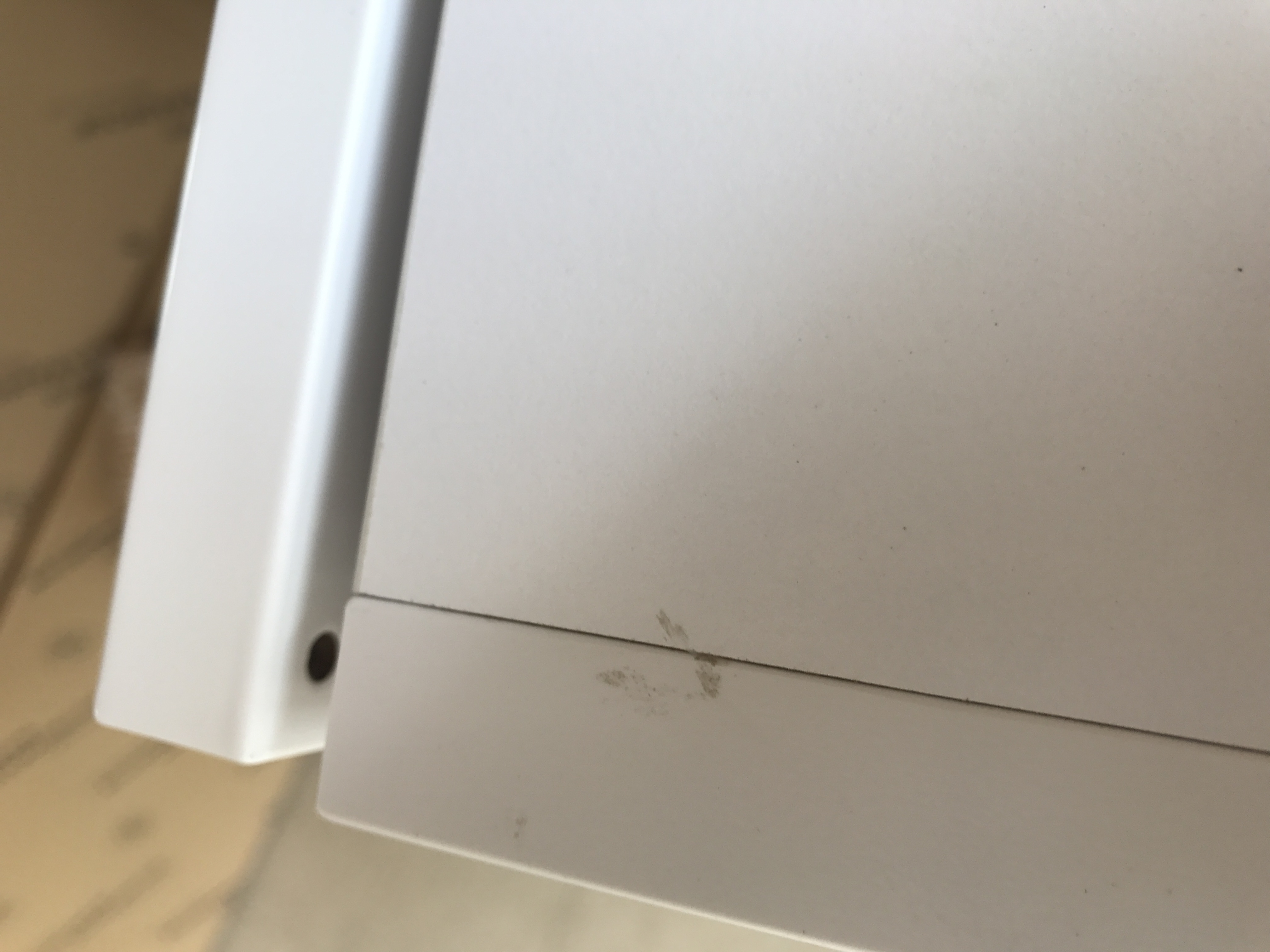 Scuff marks on both units. 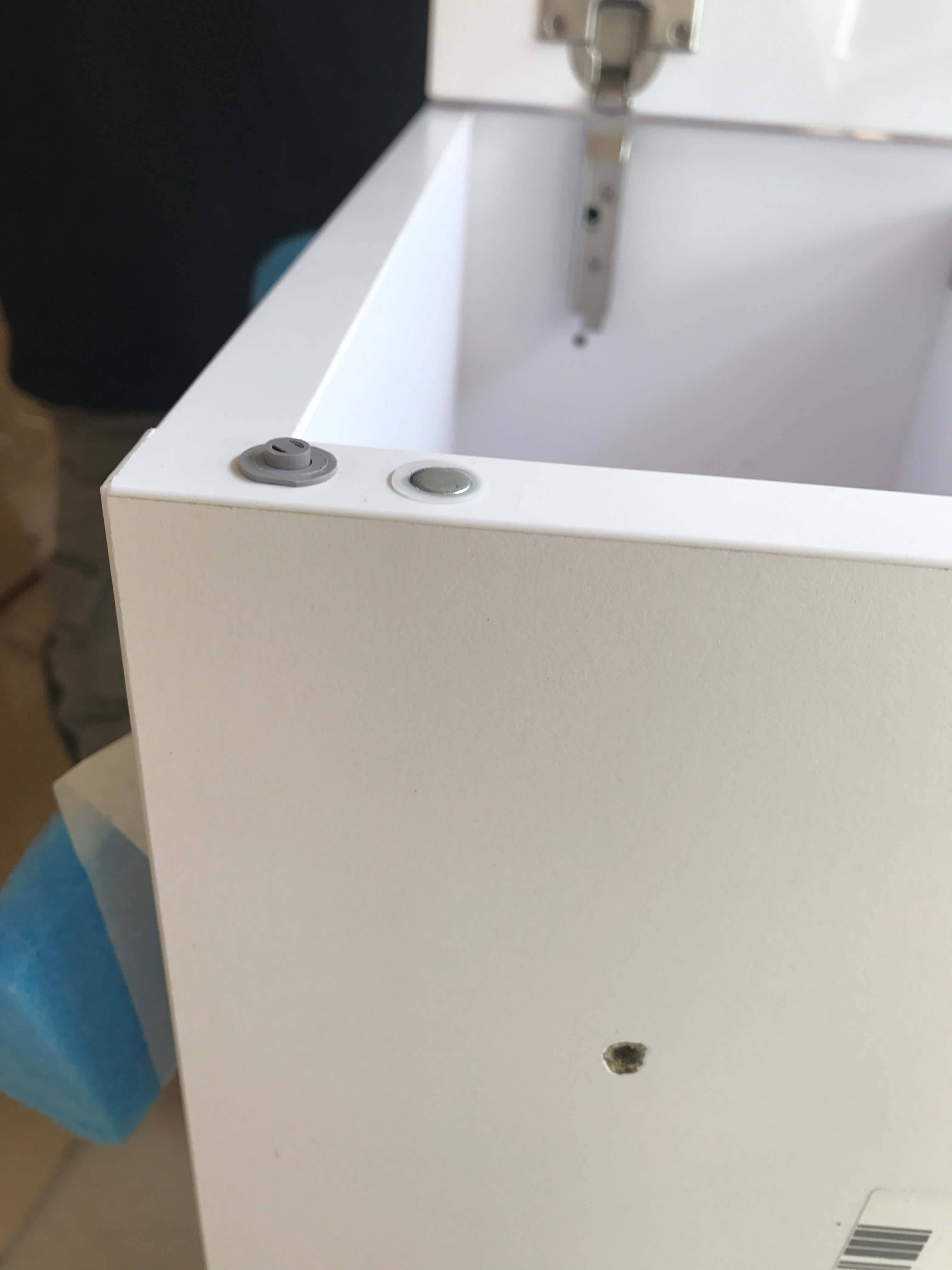 Blown out screw holes on both units. 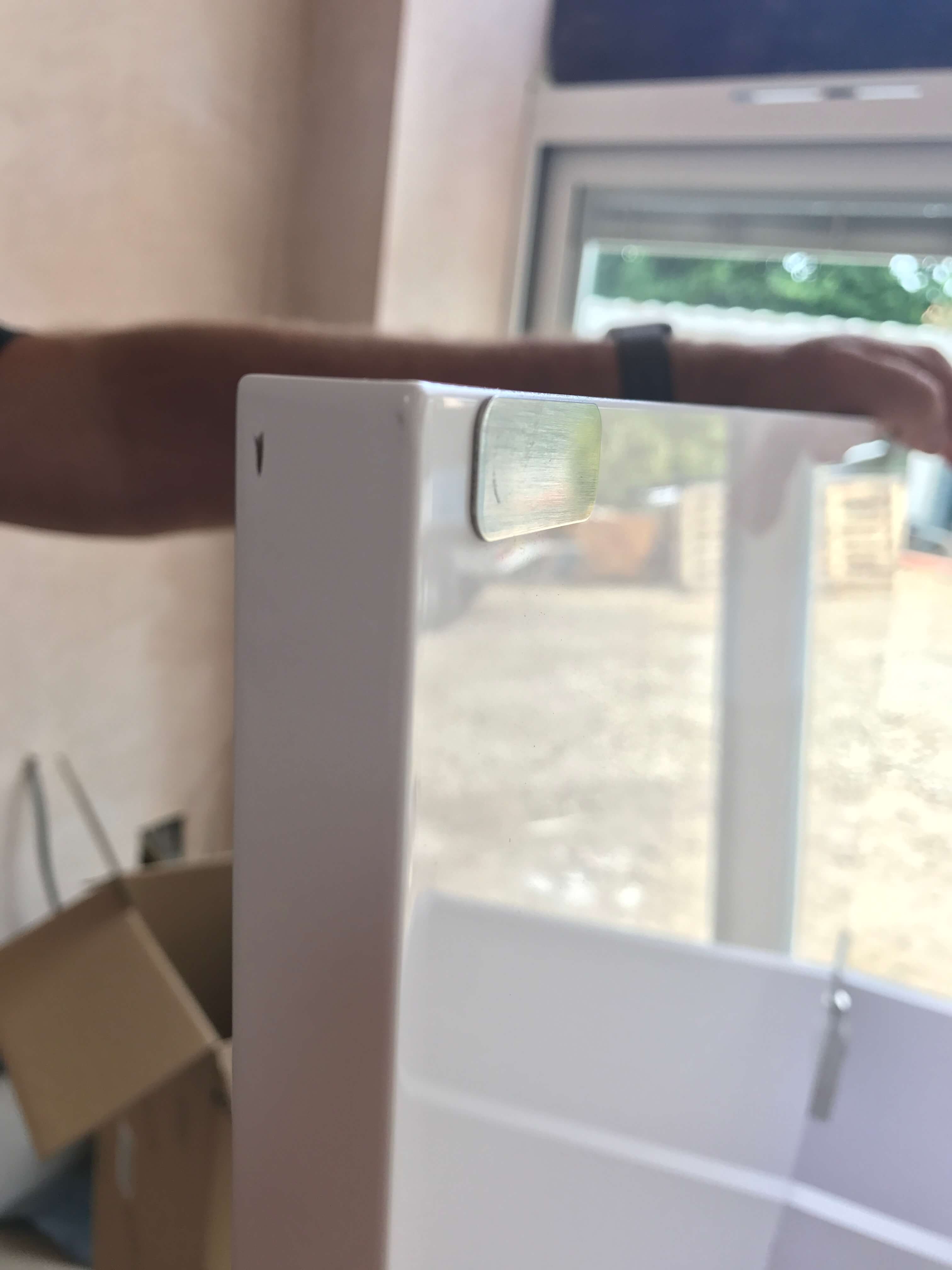 Scratches in the gloss on both units.

And these were the first two boxes, sitting on the top. It will be a miracle if the ones that have had a bunch of heavy boxes stacked on top aren’t damaged.

Now, I get that they’re not falling apart, or they haven’t had a foot through. But when you’ve spent a lot of money for a luxury service, had the company try and screw you over their own damages policy, had products poorly packed and badly delivered on broken pallets, been told it’s your fault, and spent six hours in one day trying to get them to fix it…

7) Just to finish the day off yesterday, we were told (in an email that we still have) that everything was measured during the design to the architects designs. There could be absolute no changing anything after it was ordered because everything would be cut and ready to fit.

We find out yesterday, on day of supposed delivery, when my mum is moving in three weeks, that they have to send someone out to measure the counter top and the splash back.

They can’t do this until the kitchen is fitted.

The earliest they can get someone out is in one week.

It could take two or more weeks for them to cut the counter, then you have to book them in to fit it.

They can’t measure for the splashback until the counter is fitted.

Then it can be a couple of weeks or more while they cut the splash back.

Then you have to book someone in to fit it.

Basically… after your kitchen is fitted, you can’t actually use it for best part of two months.

That should be explained, clearly when you order and in all documentation.

Obviously, quite aside from the builders schedule this ruins, my mum can’t live with no kitchen for two months.

So where do we go from here…

Yesterday I started tweeting about this, and Porcelanosa got in touch very quickly to my public tweets and asked me to direct message them, so I did. 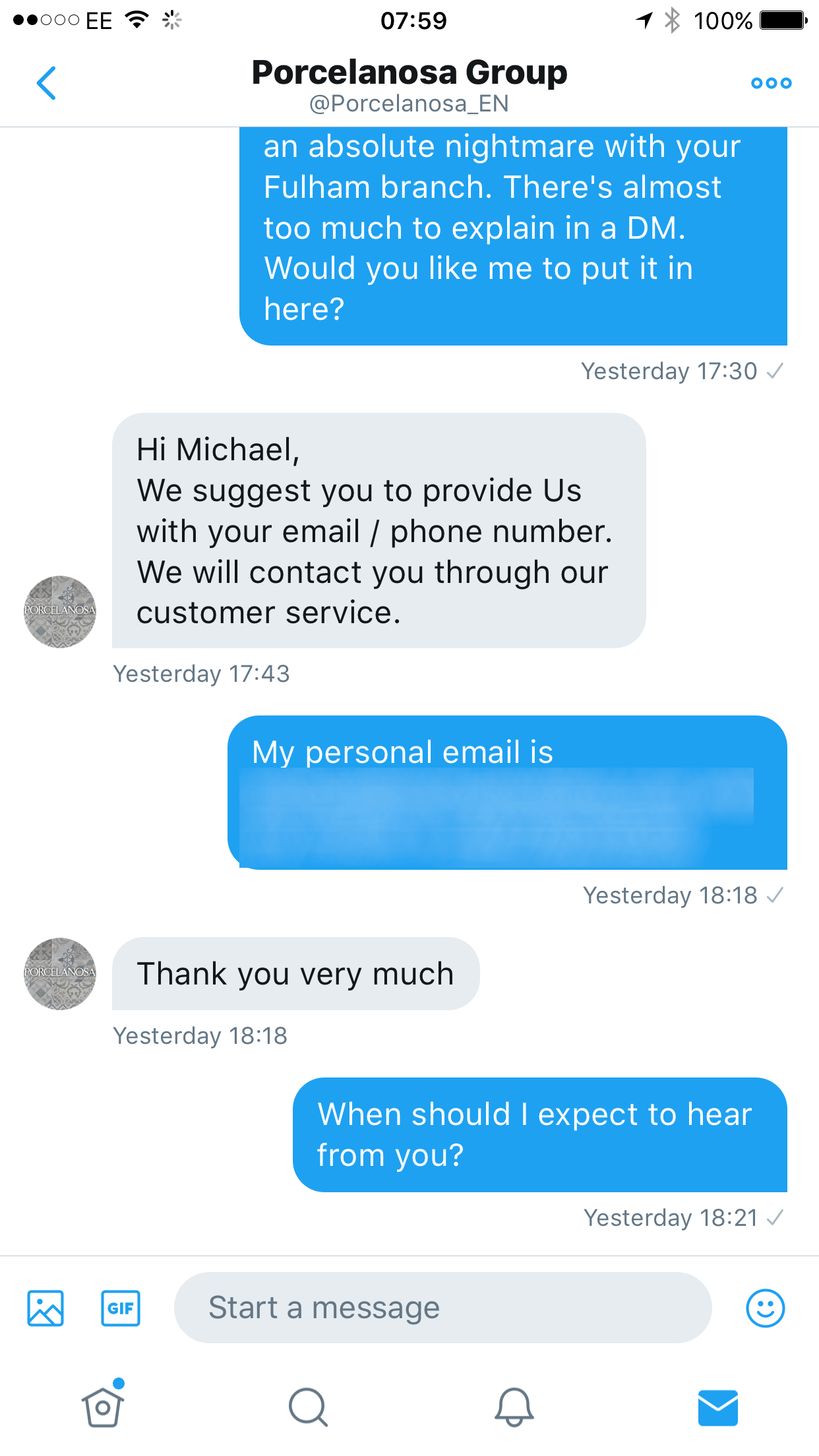 While the conversation was public, responses seemed to be flying. The first couple of direct messages got responses with in seconds and then, as you can see above, suddenly the responses dried up. Even though I replied to their message within three minutes.

In the next hour or two we are going to start unpacking the boxes and photographing every single item (which we haven’t signed for or accepted delivery on).

I am going to be Tweeting the entire process.

Please like and retweet them and include @Porcelanosa_EN in your re-tweet.

Heck, if you may feel the urge to add either of these handles to your retweets:

As my mum moves in on the 28th July, we’re asking Porcelanosa to:

A) Replace all damaged items by the end of this week and ensure that the counter and splash-backs are ready by the end of next week.

B) Take back the entire kitchen and make a full refund

C) Give a compensatory refund of a substantial amount of the cost of the kitchen, and I will keep the damaged items.

Check all the items being sent tomorrow (the kitchen tiles and bathrooms that never arrived) for damage today – before they are sent – replace any damaged items, and make sure everything is packed properly to prevent damage in transit.

My aim is to have one of this options completed by the end of the day, and I would appreciate your support in making this as public as possible so they don’t try and pass us between people or blind-side us with damage and returns policies that prevent them taking any of the blame.