We’ve set up camp on an un-excavated Mayan tomb. In hindsight, probably not the most sensible thing to be doing.

It was about then that I started to get dizzy and see black spots.

Speaking from personal experience, I would recommend that you don’t find yourself hundreds of miles from anywhere, in the middle of a jungle, on an un-excavated Mayan tomb feeling ill.

It doesn’t fill you with confidence!

Camp was setup around me, I wasn’t feeling capable of doing anything useful to help, and then our guide and his son went off fishing.

Here’s a photo of our camp: 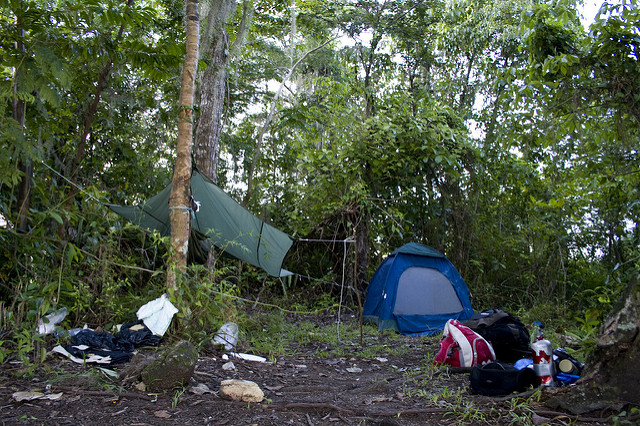 (my hammock is the green one on the left)

And here is the boat we got here on: 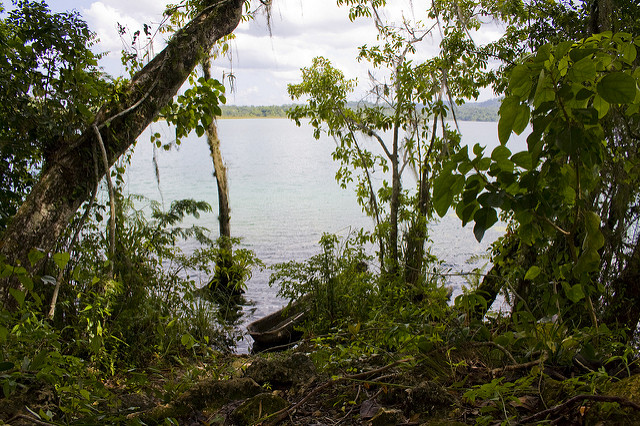 As night set in, I started to feel worse and worse.

Around 9pm I pressed the emergency button on our tracking device.

Here’s the thang… when you press one of those buttons, you’re relying on the local military coming to get you.

When you press the button in a very poor country, the local military don’t have access to helicopters, or planes that can land on water. Which means they have to walk to you.

And the number one rule in a jungle is… you don’t walk at night!

So apart from the odds drug trafficker flying over us, there was nothing we could do except go to sleep.

Which is when the howler monkeys kicked in.

If you’ve never heard a howler monkey before, they scream, and they do it loudly.

The screams ripped through the air, only quieting when there was a tropical storm for what seemed like a few hours.

In reality it was probably only a few minutes, but in case I haven’t mentioned, I wasn’t feeling great 😉

There was nothing to do except hang on until the morning.

Hearing the guide mention he thought I might have a scorpion bite didn’t help.

Of course, where we were the scorpion bites are lethal, and take about 24 hours to kill.

* The possibility of death

But eventually, the morning came…

P.S. If you’ve got any questions on how to make money online, you should ask them in our private Facebook group.

The secret life of Roald Dahl